What is the gender pay gap? 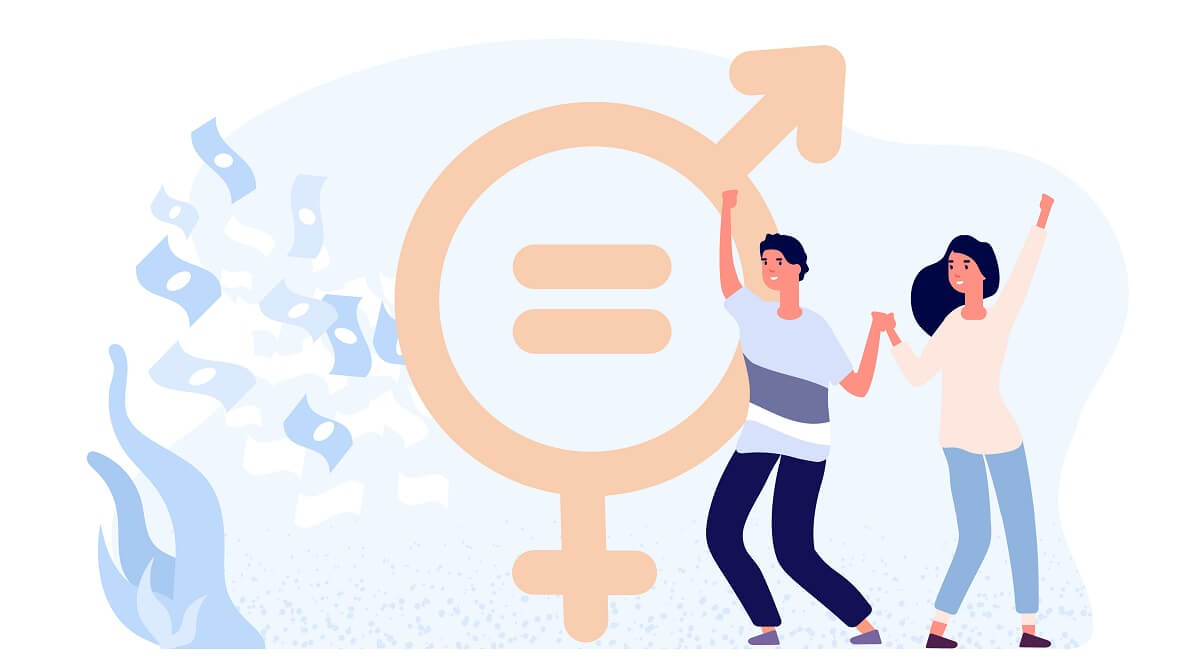 There is no lack of studies confirming the fact that women earn, on average, less than men. This remuneration difference is known as the gender pay gap. While this gap has been closing in recent years, there is still a long way to go to achieve true gender equality in the working environment.

We dug a little deeper into this by analysing the causes, the situation in the UK and Europe. And we also go over some of the proposals to eliminate the gap.

The European Commission defines the gender pay gap as “the difference between the average gross hourly earnings of men and women expressed as a percentage of male earnings.”

The Economic Policy Institute puts it this way: “the gender wage gap is a measure of pay disparity between men and women.”

Unequal pay, on the other hand, is where the value of the work or job role performed by men and women is the same, but the salary is not.

The European Commission published the EU action against pay discrimination in 2014, with the statement: “EU countries must end all discrimination from their national rules and laws.

But the situation in the various European countries differs considerably, as do their laws on the subject.  In the UK, for example, the Equality Act 2010 (Gender Pay Gap Information) Regulations 2017 require all private and voluntary sector employers with 250 or more employees to report their gender pay gap.

But according to Reuters, 13 EU member states still have no pay transparency measures in place. Others vary, such as Germany, who introduced the right to pay information for companies with over 200 employees, and Belgium who plan to combat this through collective bargaining.

The gender pay gap is a complex problem affected by a range of factors which are often interrelated.

Discrimination in the workplace

Women often earn less than men even though they're doing the same job and with the same responsibilities. This usually stems from direct discrimination, where women's work is undervalued.

Companies can mitigate such bias through specific policies or by creating an equality plan.

Barriers to a work-life balance

Women frequently work fewer hours to try and balance their work and family responsibilities. According to an analysis by the European Parliament, only 8.7% of men in Europe work part-time, in comparison to 31.3% of women.

This means that the chances of women advancing within the company or getting a salary increase are drastically reduced. And it's a fact that the gender pay gap increases when women have children and reduce their working hours.

Women have traditionally dedicated more time to looking after their family and work around the house. An article in The Independent revealed that women do the bulk of domestic chores in 93 per cent of the couples analysed in a study by University College London. The study also revealed that women spend approximately 16 hours a week on household chores, while men spend only six.

Men and women often do different types of work, and so we often find significant polarisation by sector. For example, women are strikingly predominant in the healthcare sector (80% of workers are women). And according to the European Commission report mentioned earlier, there is evidence to suggest that salaries in these sectors are lower than in those which are predominantly male.

Women may have to accept jobs with fewer hours or a lower salary to achieve a work-life balance and few possibilities of promotion to senior posts.

The term "glass ceiling" is used to describe an invisible barrier that obstructs women's access to senior positions in business or politics. Only a third of scientists or engineers in Europe are women. And even in the more female-dominated sectors, few positions of responsibility are held by women.

Women now hold a third of boardroom roles in the UK, according to this report in The Guardian.

Women’s work and skills are undervalued

Women's skills and the work they do are often undervalued, which usually results in them enduring poorer conditions. For example, a supermarket cashier is paid less than the man working in the warehouse. Women who do cleaning jobs also earn less than a male street sweeper, and the list goes on. 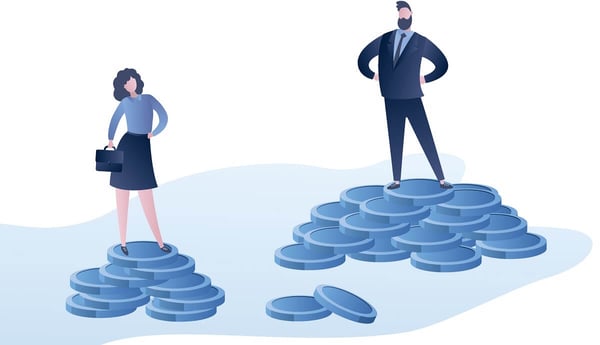 Is there a gender pay gap in the UK?

So despite the government's effort to monitor pay levels in UK businesses, there is still a gender pay gap in the country.

As we mentioned at the beginning, there is a wide range of reports that confirm the existence of a gender pay gap in the UK, and how the situation currently stands. We've extracted some specific data from these to give you more context.

According to the European Parliament, women in the European Union earn around 15% less than men. The end of the scale, Estonia has the biggest gender pay gap with 23%, while Romania has the lowest with 3%. 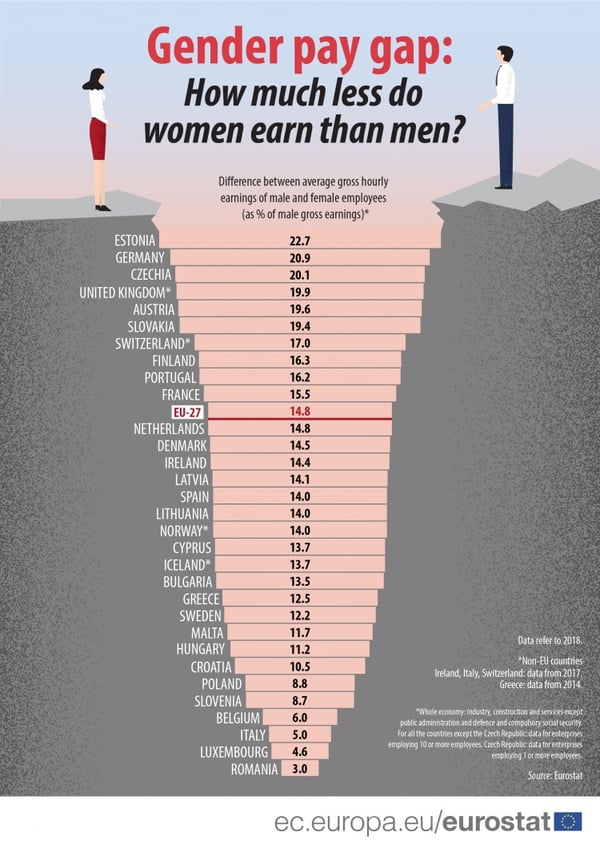 It's worth highlighting that a lower gap doesn't necessarily mean greater gender equality, as this is often seen in countries with lower female employment rates.

In terms of discrepancies between sectors, statistics by the BBC and Eurostat reveal that in all member states, except Spain, the gender pay gap was higher in financial and insurance companies. This was as high as 34% in the UK, the fourth-highest rate in Europe.

Interestingly, in a significant number of states, some sectors revealed negative gender pay gaps (where women earn more than men). This was true in the water supply, sewerage and waste management and remediation activities, as well as the construction industry.

Eurostat also shows that the gender pay gap increases with age due to the career breaks women take in connection with motherhood.

This article published in People Management agrees with this principle and states that the gender pay gap is at its worst when women reach their fifties.

Generally speaking, the younger a woman is, the smaller the gender pay gap will be. And it increases with age, the worst affected being the oldest women with the least qualifications. The reflection point seems to be from 30 years onwards when most women have children. It tends to decrease again slightly at around 40 years of age.

As we mentioned earlier, the highest gender gaps appear in South East England, with London topping the list. In 2019, women working full-time in London earned 86p for every £1 earned by men. Wales showed the highest level of equality and where women earned 96p for every male £1. Northern Ireland had a negative gender gap, probably because the region has a higher proportion of public sector workers. Public sector workers have a lower gender pay gap than the private sector.

How is the gender pay gap calculated?

If you don't want to do this manually, there are other methods that will help you quickly and easily identify inequalities. For example, let's look at HR analytics tools that offer automatic reports based on data the company already has.

At Kenjo, we have reports and analytics features that show detailed information about employees’ salaries, that you can filter by gender, position in the company, etc. So, you’ll be able to see whether there is a gender pay gap in your company, or not.

How to reduce the gender pay gap

In 2017, the World Economic Forum estimated that it would take 217 years to close the global pay gap. Here are some actions you can take to reduce the gap.

Organisations should set up self-monitoring protocols to identify salary discrepancies between men and women. Data should be segregated by gender, and you could also introduce other relevant variables such as age, time served, training and qualifications, etc.

The government advises companies to develop an equality plan, and those with over 250 employees must submit a gender pay report which analyses this data.

Creating salary bands will avoid gender bias that can arise when establishing employee salaries. These bands are set with a minimum and maximum salary for everyone who holds the role in question.

All companies should conduct appraisals on the performance and results achieved for each employee. This will help you when awarding pay increases or promotions and also spot internal talent.

One thing we’ve learned is that efforts to obtain a work-life balance are among the main causes of the gender pay gap. By facilitating and encouraging remote working in your company, for both fathers and mothers, will enable them to manage childcare more easily without interrupting their career.